AppBackup is an app for jailbroken iOS devices that lets you back up and restore the saved data and settings of App Store apps.  AppBackup DOES NOT back up the apps themselves, just the stuff they save (like settings, game progress, etc.)

AppBackup is free software, which means that it respects your freedoms.  Its source code is freely available under the terms of the X11 License.

AppBackup does not work on iOS 8 or later.

I am no longer maintaining AppBackup, so this will likely never be fixed.

The command-line interface has been updated for iOS 8.  Instructions on how to install and use it can be found here.

Compatibility Note:  I am unable to test AppBackup on iOS 4 or later because I only have a 2G iPhone.  However, users have reported that AppBackup does work on iOS 7.

AppBackup is available via BigBoss’s repository (or mine) on Cydia! You can find it under the Utilities section.

You can find older versions here.

Get the source code here. 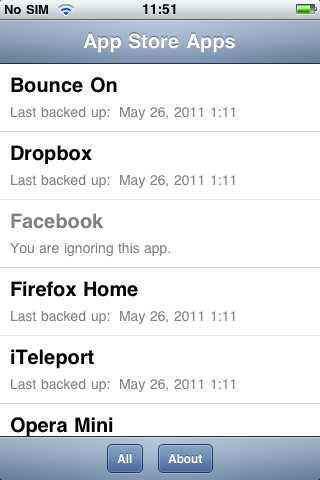 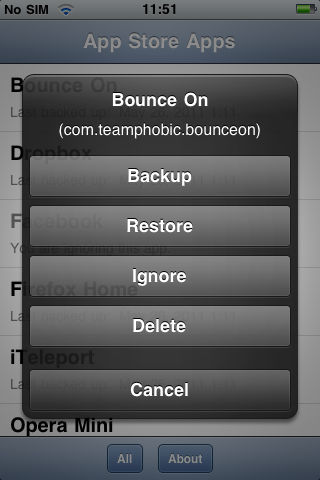 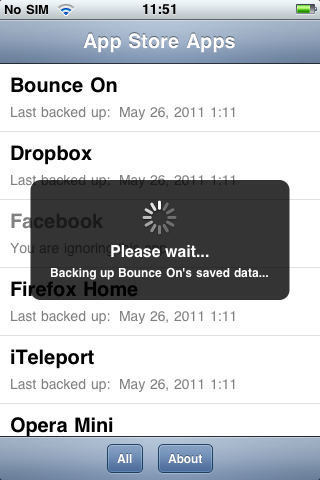 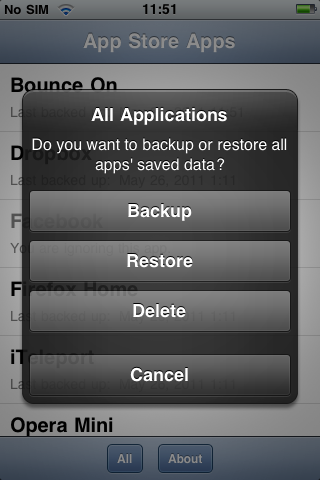 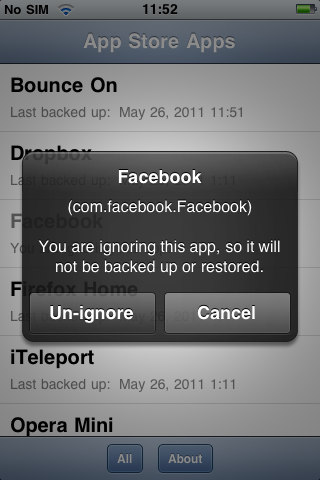 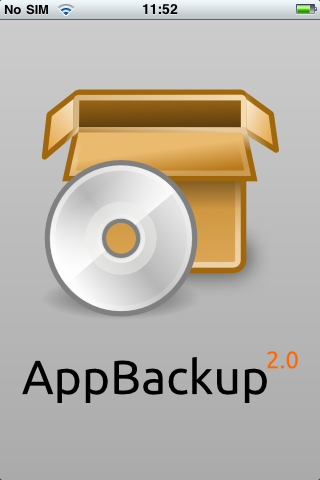 AppBackup is available via BigBoss’s repo on Cydia.  You can also download and install the Debian package directly, but you will need to make sure the following packages are installed first:

To back up one app, open AppBackup, select the app, and then select Backup.  To restore an app, select it and then select Restore.  (If there is no restore option, then it hasn’t been backed up yet.)  You can also choose to delete an app’s backup, or to ignore or un-ignore the app (i.e. prevent it from being backed up, restored, or deleted).

To back up all apps at once, tap All at the top-left of the screen, and select Backup.  To restore all apps that have been backed up at once, tap All and select Restore.  (You must have at least one app backed up in order to see this option.)  You can also choose to delete all backups on your device (except those for apps which have been ignored).

The app list only shows apps that have already been installed through the App Store.  If you have just reset your device and you want to restore app data, then you must first reinstall the apps whose data you want to restore before AppBackup will let you restore their data.

Backups are stored in /var/mobile/Library/Preferences/AppBackup/tarballs as files called <bundle-id>.tar.gz, where <bundle-id> is the respective app’s bundle identifier (e.g. com.ooi.supermonkeyball).  These files are regular gzip-compressed tar archives and can be opened with any program capable of viewing them (e.g. 7-zip on Windows).

If you want to “back up the backups,” you should back up the entire /var/mobile/Library/Preferences/AppBackup directory tree.

AppBackup also has a command-line interface (which currently works with at least iOS 2.x–8.1.x).  It is available as part of the Cydia package or from the Python Package Index.

The command-line interface that comes with the Cydia package is called appbackup, and the one in PyPI is called iosappbackup.  Currently, the Cydia one is outdated (I’m waiting to update it in Cydia until I have the GUI working on iOS 8, in order to avoid confusion), while the PyPI one is the one that works on iOS 8.  In AppBackup 3, these will both be the same thing, but the name difference will remain in order to avoid conflicts between the two.

To install the command-line interface from PyPI on a jailbroken iOS device, run these three commands on your device:

(The -U means to upgrade the package if it’s already installed.)

Usage examples (only for the new iosappbackup):

You can also install the AppBackup command-line interface on a Mac (e.g. to use it with the iOS Simulator), or even on a non-Apple operating system such as GNU/Linux.  To do so, first install pip if you don’t have it already:

Then install iosappbackup using pip (on Arch, use pip2):

(As with easy_install, the -U means to upgrade the package if it’s already installed.)

(Using pip is recommended as it allows you to uninstall packages, whereas easy_install doesn’t.  On an iDevice, however, you must use easy_install because pip doesn’t work with Python 2.5.)

If you are not using iosappbackup on an iOS device, you will need to tell it where your apps are with the -r (or --root) option:

It will use the Library/Preferences/AppBackup directory inside the directory given with -r as the backup and data location.  You can also use the -c (or --config-dir) option to use a different location for the backups and data.

I use Transifex to manage translations for AppBackup.  If you would like to translate AppBackup to another language, or update an existing translation:

NOTE:  %@ is a placeholder for various items of text that are included at runtime.  You need to have the %@ in the appropriate places in your translations for AppBackup to work.  The instructions for each string containing %@ will tell you what the %@ stands for, although for many strings it will be obvious.

AppBackup is free software, which means that it respects your freedoms.  Its source code is freely available under the terms of the X11 License.  AppBackup also includes software released under similar free, permissive licenses.  For the full text of the license and copyright notices for AppBackup and all software included with it, see the LICENSE.txt file in the source repository.

AppBackup would not have been possible without the work and help of others.  See CREDITS.txt for a list of these people.

AppBackup’s source code is available on Bitbucket at https://code.s.zeid.me/appbackup.  AppBackup is written in Objective-C, Python 2.5, POSIX shell, and C.